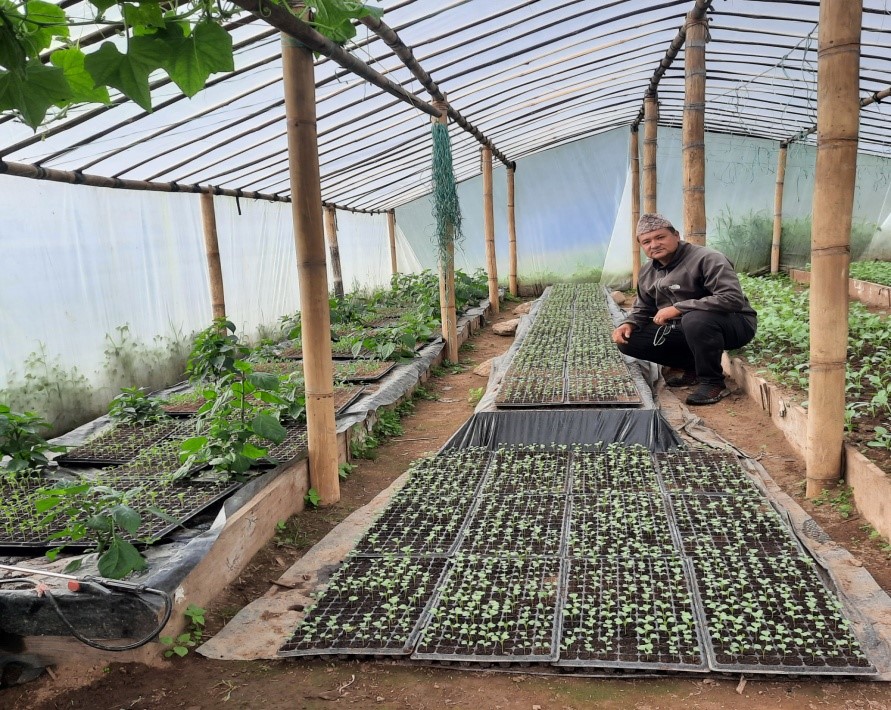 A permanent resident of Shailung Rural Municipality, Ward No-3, Dhunge Mr. Ganesh Bahadur Shrestha is seen as very busy these days working on his farm for commercialized vegetable farming. This is a very good example of “where there is a will, there is a way” by Mr. Ganesh Bahadur himself. A few years back he was working on his farm that was only subsistence level, but today he is established as a good agro-entrepreneur. Continuing his life in a smallholder family, he became associated with RRN after the epidemic of COVID-19 in the year 2020. The COVID-19 disease created difficulty to sustain even day-to-day activities. There were supports and benefits from different helping organizations, but they were all temporary. Meanwhile, RRN is implementing a project named Smallholder’s Empowerment by Entrepreneurship Development (SEED) and he became a member of one of the Self-Help Groups (SHGs) the project SEED is supporting to form such SHGS in different villages. At the same time, Shailung Upa Krishak Farmer’s Group is a part.

Then with different activities of the SEED project along with the technical and partial financial support from the staff members, he started nursery raising and organic farming after having agro-ecology and off-seasonal and seasonal vegetable production training through Rural Reconstruction Nepal (RRN). But more importantly, it has inspired many other smallholders to focus on agro-enterprises for pro-organic business-oriented farming. Now, he has started his business by making share net houses, so that those could be used for off-seasonal vegetables and pro-organic farming. A little number of seed and saplings support and related training were provided by the SEED/RRN. The regular technical assistance from the project has been a huge support to him to earn a very good income from that farming which he thought was impossible before bringing it into practice. Now, he came to believe that organic farming can be a profitable and healthy business as an enterprise. He sold the cauliflower/cabbage and earned Rs. 100,000, potato at Rs. 100,000, radish at Rs. 30,000, and carrot at Rs. 40,000 annually.

He is also preparing bio-fertilizer(organic) by using locally available plants and cow urines. At this time, with a good income from organic farming, he has been able to run his household expenses as well as for the education of his children and grandchildren. For the upcoming days, he is planning for the cultivation of red radish and local Sikkimese peas variety which is an indigenous crop of Dolakha district as well as a very high price giving crop. He is giving more priority to organic vegetable production mainly cauliflower, cabbage, and other regular cultivations. He is confident that business-oriented farming is one of the better agro-enterprises to increase incomes and better life. So that he is increasing the number of nursery tunnels and now SEED/RRN project is also planning to support him further to demonstrate him as a model smallholder to promote pro-organic entrepreneurship. So, other farmers in the community have come to believe that organic farming can be an attractive agri-business which is also highly demanded in today’s generation as well urgent needs for better food and health of the people. He appreciated very much the concept and support of the SEED/RRN project and its staff members for the promotion of pro-organic agro-entrepreneurship and this is the better pathway for the future of smallholders, their own community, and broadly for everyone!

Photo story of relief distribution done in response to Covid-19